I looked around. I swore I heard someone calling out. The silver wattle swayed. The mountain ash towered. No. I must have been dreaming. I was tired. I reckoned I still had enough daylight to do one more site but maybe the three I had done would do. I was stuffed. I shook my head and refocused.

“Helloooo? Moss Lady. Are you there?” 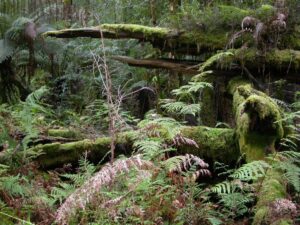 I wasn’t dreaming. The Melbourne Water crew thought it amusing that I would spend my days looking for moss. ‘Moss Lady’. It was novel and easier to say than my real name, so it stuck. I doubt they actually remembered my real name.

“Hello?” I called back. I started walking. No. Not walking. Climbing and scrabbling over logs and pushing through shrubs is more precise. I wished I didn’t bruise so easily.

“Ah, there you are. I just wanted to let you know your welcome tomorrow morning to use our shower”. The caretaker of the O’Shannassy catchment must have seen the startled look on my face. “My wife will be there, and the kids” he hastily added. As if to cover up for my embarrassment he asked,

“So, what exactly are you doing?”

But look down a magnifying lens, and say hello to a magnificent microscopic kingdom. With no common names the scientific names are daunting. I soon learned that Tychom nion is actually Ptychomnion aciculare and the scientific names could be tongue twisters.  So I gave them nicknames, which in turn endeared them to others.

It’s not all moss. Together, moss, liverworts and hornworts are called bryophytes.  Species of liverworts outnumber moss in old growth wet eucalypt forest. Approximately 1/3 of the total bryophyte flora of Tasmania exists in these >100 year old stands.  Even vascular plants are outnumbered e.g. in one old growth wet eucalypt forest in Tasmania there were 110 species of bryophyte to 22 species of vascular plant. Bryophytes are abundant and diverse in wet forests, with fewer species in comparison found in drier forest types. 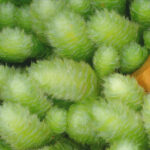 It was the Easter weekend of 1996 and I was wishing I had chosen dry forest for my Honours project. It poured. Surveying for bryophytes is only prevented by a lack of light or a damaged hand lens. Oh, and deer hunters.

“You can’t go into the catchment”. I’d turned up to get a radio and gate keys and the caretaker was adamant.

“Can I ask what the reason is?” I asked. I had planned this field work and I really needed to get these sites done.

“It’s the Easter weekend. We’re expecting a lot of illegal deer hunting. Having you in the catchment is too risky. These guys are not careful when and where they shoot.”

Right. That was clear. I’d already come head to head with a deer at the Poley Tower. And another had startled me at a field site. Or did I startle it? Poachers I could do without. I headed back to Marysville to cancel my tent site. No point staying when I couldn’t get to my field sites. I explained my predicament to the person at reception.

“Sorry. It’s the Easter weekend. We don’t give refunds.”

Far out. Could anything else stuff up the weekend? My Honours budget was tight; I’d used my own meager savings to pay for the campsite. I had to stay and check my maps and find some sites outside the catchment. 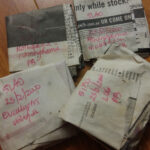 The weather seemed determined to reinforce that I was working in a water catchment. I hunkered over the steering wheel, getting as close to the heater vents as I could. My boots were drenched. My feet were sodden and frozen. Long fingers were an interesting shade of blue. Scraping millimetre sized mosses and liverworts from substrates such as logs and rocks meant I couldn’t wear gloves. My frozen fingers folded  more paper envelopes using the A4 sized paper. I was running low.

The envelopes I collected my moss samples in were soggy but at least they were still intact. The hanging orange net bags I stuffed them in worked a treat; the vehicle looked comical with orange net bags dangling around windows. I cursed George Scott for saying that a good ecologist learned most from field work in all weather. I selfishly wished he and his hip flask were with me; I could do with a ‘wee dram’. 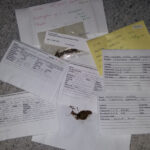 My samples were dry and so were my boots. The rubber on the boot soles was slightly melted from the campers’ fire but I didn’t care. It was night and I was dry and soon fast asleep. I heard someone calling my name. Not ‘Moss Lady’ this time.

“Perpetua Blanks? From Melbourne Uni? Are you in there?”  Drearily I woke. That was rather specific. Who on earth could be wanting me?  I replied an affirmative.

“Ah, good. You’re safe. It’s Marysville Police. Have you got your mobile turned on? Your mother’s been trying to contact you. She couldn’t get you via your mobile. She asked the reception staff. They told her you had gone back to Melbourne as you couldn’t work up here.  Perhaps you had better call her.”

His tone wasn’t suggestive. It was directive.

Who would have thought bryophyte field work could be so interesting.

Twenty-five years on, this Moss Lady thinks it still is.

This article was first published on the Pep Talk Ecology blog. The author, Perpetua Turner, is a current ESA Board member and Chair of Ecological Management & Restoration.