In 2009, the Christmas Island blue-tailed skink and Lister’s gecko were headed for imminent extinction. Parks Australia acted quickly to collect remaining wild individuals in order to establish captive breeding programs on Christmas Island and at Taronga Zoo, Sydney. These programs have been highly successful. The Threatened Species Recovery (TSR) Hub is working closely with Parks Australia to help secure a future for the two lizards beyond captivity.

The endemic species comprise several million years of evolutionary isolation. All the lizards remained common up to the 1970s, but four then declined precipitously. These declines were probably caused by the inadvertent introduction of the Asian wolf snake (Lycodon capucinus) from stowaways on freight shipping.

In 2009 and 2010, Parks Australia in partnership with Perth Zoo and Taronga Zoo collected 66 blue-tailed skinks (Cryptoblepharus egeriae) and 43 Lister’s geckos (Lepidodactylus listeri) from the rapidly dwindling wild populations to establish captive breeding programs on Christmas Island and at Taronga Zoo. The blue-tailed skink was last seen in the wild in 2010 and Lister’s gecko in 2012, and both are presumed extinct in the wild. Efforts came too late for the Christmas Island forest skink (now extinct) and the coastal skink (extirpated from Christmas Island). 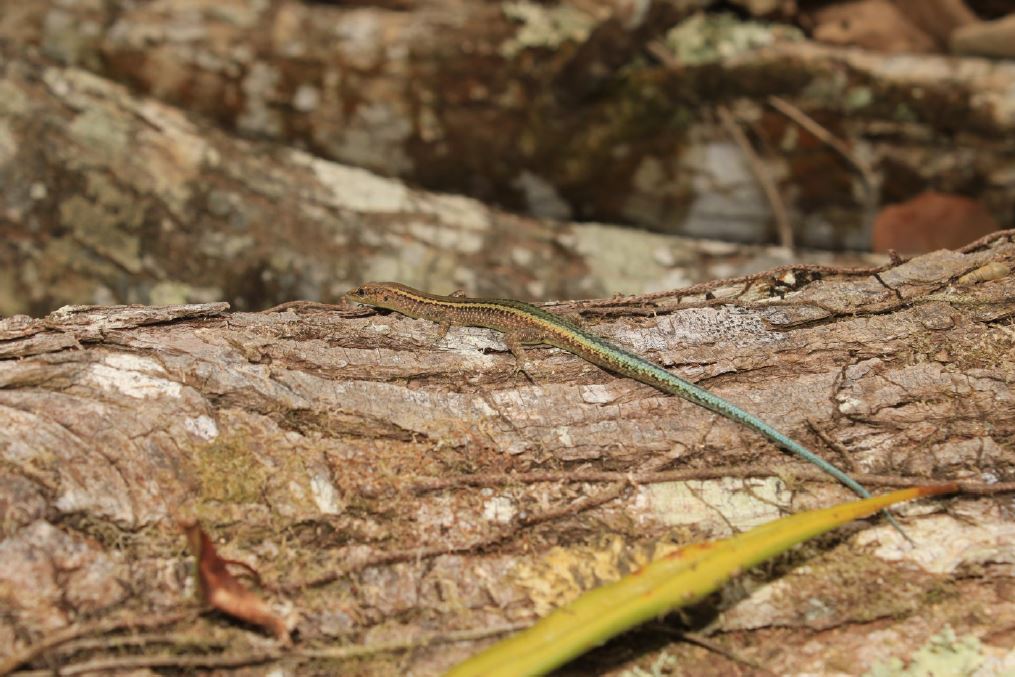 Populations of the Blue-tailed skink, endemic to Christmas Island, are dwindling rapidly. Captive breeding and reintroduction trials are helping to save this spe-cies. Credit: Jon-Paul Emery.

The first of these explorations was trialling a soft release of blue-tailed skinks in a semi-wild enclosure on Christmas Island. The 2,600 m2 enclosure is surrounded by a 1 m-high barrier designed to exclude potential introduced predators such as wolf snakes, black rats and giant centipedes. In April 2017, Parks Australia released 139 blue-tailed skinks into the exclosure and TSR Hub PhD candidate Jon-Paul Emery, from the University of Western Australia, monitored the new population.

Jon-Paul recorded a gradual decline in numbers, and by September 2017 none were detected. Further investigation indicated that the decline may have been due to predation by giant centipedes. Efforts had been made to remove them prior to release, but some were still present. Centipedes had not previously been considered a primary threat to the skinks as they had been on Christmas Island for nearly 80 years prior to the rapid decline.

Jon-Paul undertook an experiment exposing skinks in smaller enclosures to a density of centipedes that matched that of the exclosure for three months and found that it reduced the survival of the skinks by over 30%. Christmas Island National Park staff consequently made great efforts to eradicate centipedes from the reintroduction site, in preparation for another trial. Parks staff and Jon-Paul also added an estimated 20 tonnes of logs and branches, 10 tonnes of rock, ceramic tiles and wooden pallets to the site, to improve habitat suitability.

Jon-Paul Emery at the second trial site, where 170 Blue-tail Skinks were released into exclosures on Christmas Island. Credit: Leonie Valentine.

The second trial saw 170 skinks released to the same site in early August 2018. Fifteen months later, in November 2019, the populations has increased to an estimated 550 individuals. Based on this success a second larger enclosure is being established and a further 300 blue-tailed skinks are planned to be released into it in March 2020.

In February 2019, 160 Lister’s Geckos were also released to the site. Monitoring indicates that by Dec 2019 the population had contracted to fewer than 40 adults, but site-born juvenile geckos have also been observed. The climbing ability of these geckoes presents more of a challenge to contain them within the enclosure, and we suspect that many dispersed from it.

A new stage of recovery action for the blue-tailed skink is underway. In September 2019, Parks Australia, supported by the Shire and community of the Cocos (Keeling) Islands, introduced 300 skinks to the tiny uninhabited island of Pulu Blan (2 ha) in the Cocos (Keeling) Island group. This island was selected because it had no native reptile species and no populations of the wolf snake.

The release followed successful rat eradication on the island by Parks Australia. TSR Hub Masters student Kristen Schubert, from the University of Western Australia, is monitoring the released animals and has found that survival of blue-tailed skinks three-month post release is high and skinks have been observed mating. Future work will also examine the extent of predation on the lizards by birds (reef egrets, night herons and white-breasted water hen).

A second release to another island in the Cocos group, Pulu Kembang (3.4 ha), is planned for March 2020.