Marine and coastal resources provide numerous benefits to support our living on earth, including a rich variety of seafood, regulation of climate and water resources, and protection from storms and cyclones. Globally, the economic value of these resources is worth USD 24 trillion per year.

In Australia, marine systems alone contribute about AUD 69 billion each year to the economy but only AUD 44 billion of that value is formally recognised in economic accounts, which includes marine-based industries such as commercial fishing and aquaculture, shipping and ports, offshore oil, gas and renewable energy, and marine and coastal tourism. However, the value of numerous other non-marketable ecosystem services (the benefits and goods people obtain from coastal and marine systems) including recreational fishing catches and fisher activities, supporting local and Indigenous livelihoods, climate and water regulation, breeding grounds for marine life, and pest and disease control, largely remain ignored. A main reason for this is that these goods and services are not bought or sold in formal markets, hence ignored in our accounting processes. But these non-marketable goods and services contribute significantly to people’s well-being across local, regional and global scales. 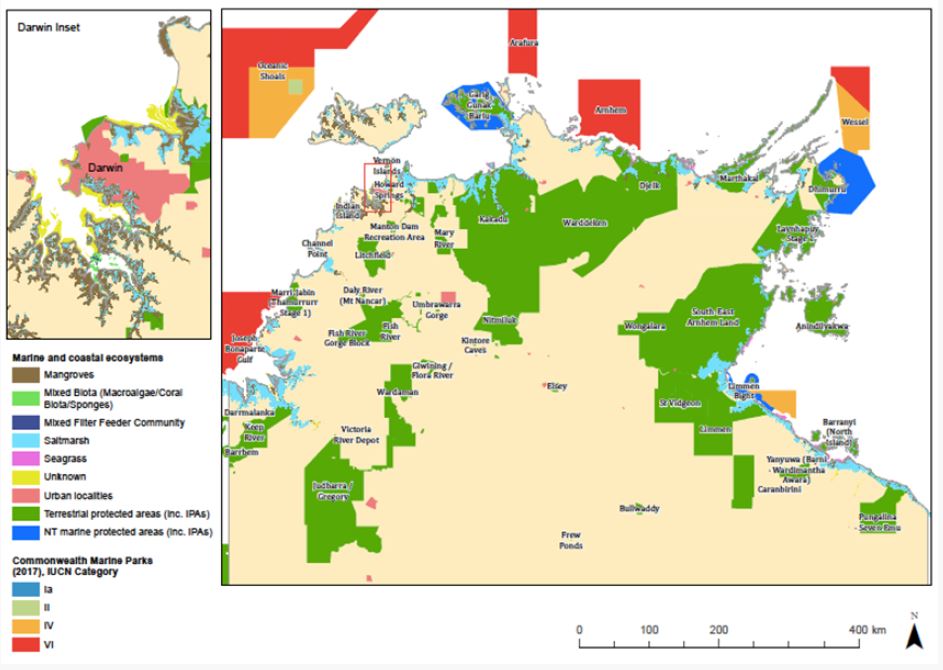 Coastal, marine and terrestrial protected areas in the Northern Territory that were assessed in this study. Data was sourced from the Collaborative Australian Protected Areas Database 2016, and the Australian Marine Parks 2017 database.

The Northern Territory includes 11,000 km of coastline, including its 398 islands. We assessed the total economic value of goods and services provided by the Northern Territory coastal and marine resources in terms of ‘Economic impact’ (i.e., direct value to the economy, such as commercial fishing and aquaculture ), and ‘Economic value’ (i.e., value towards well-being of people, such as recreation and Indigenous cultural values). We particularly addressed both Indigenous and non-Indigenous values.

The coastal and marine resource values for 35,000 Indigenous people living along the coast of the Northern Territory were estimated at $395 million/yr in terms of people’s wellbeing, and at $52.5 million/yr for provisioning food alone. Indigenous people hold unique cultural values that dates back thousands of years. Many of these values include continuing longstanding traditions, customs and rituals, and customary lores related to peoples’ knowledge and management of these resources, and are difficult to assess in monetary terms.

This assessment of ecosystem services offers a critical and valuable perspective for highlighting the importance of nature-based economies not just for the Northern Territory but for the whole northern region. It also offers a reliable tool to analyse the landscape-scale opportunities and distribution of benefits to support equitable and sustainable use of resources. Such assessments could be used to develop Payments for Ecosystem Services mechanisms to ensure equitable benefit delivery to the local Indigenous communities.

With increasing pressure on coastal and marine resources and competing interests, maintaining sustainable, equitable and efficient use of resources is a challenge. Local scale value assessments, like this one, can help us inform decision-making for considering the value of not just marketable but many non-marketable services that are vital to support and enhance Indigenous communities’ livelihoods and well-being. Such integrated assessments are also essential to appropriately inform policy decision making to develop sustainable coastal and marine resource management strategies.

For more information:
kamaljit.sangha@cdu.edu.au ¤
This project was funded by the Australian Marine and Conservation Society.