Bringing more nature into our cities requires more than a few trees, with governments spending millions of dollars to increase urban biodiversity for the benefit people and the environment.

Nest boxes, shelter sites, and artificial refuges are all now used to provide habitat for possums, gliders, lizards, bees and more. But despite their widespread appeal, the current implementation of these techniques is ad hoc, and it’s not clear which approaches are effective, according to Dr Caragh Threlfall from The University of Melbourne.

“Nest boxes, for example, are commonly promoted as a way of providing habitat and you will find them installed in many urban reserves,” says Caragh. “However, in many cases they are of limited use and provide habitat for very few species.” 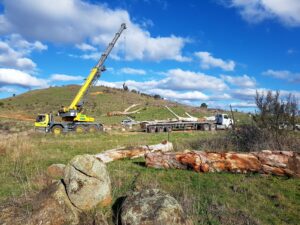 In Canberra, an alternative method of saving entire old trees from development sites and re-locating them in conservation reserves has been wildly successful, with the hollows being used by a variety of birds, bats and reptiles. (Image: Dr Darren Le Roux, ACT Parks and Conservation Services.)

“What this example highlights, is that there is an urgent need to develop evidence-based guidance on how to best approach urban habitat restoration – detailing which are most effective, and if they are enough to reduce human impacts on urban ecosystems,” says Caragh.

As the recipient of Ecological Society of Australia’s 2019 Wiley Next Generation Ecology Award, Caragh intends to establish an urban habitat restoration network, working towards implementing a national-scale experiment to test the effectiveness of specific restoration actions and identify best-practice benchmarks.

Caragh and colleagues have already compiled an inventory of urban biodiversity projects around the country through interviews with land managers (including includes local Councils, State Agencies, community groups and non-government organisations), and she has collaborated with 21 researchers from the USA, UK, Mexico, Europe and Australia, to develop a global database on biodiversity in cities.

Caragh intends to use this knowledge and network to pioneer a consistent approach that can be applied in multiple cities to test the effectiveness of specific interventions.

Caragh exemplifies the next generation of ecologists, combining ecological, spatial, and social sciences, and partnering with industry and the community to co-develop environmental solutions to the ongoing challenges posed by urbanisation. Her research addresses the interdisciplinary problem of reducing human impacts on urban ecosystems – striking the right balance between good outcomes for urban biodiversity whilst engaging urban communities in the development of novel approaches that are suited to the challenges of urban ecosystems.

Dr Caragh Threlfall is the winner of the Ecological Society of Australia’s 2019 Wiley Next Generation Ecology Award for her project: Benchmarking the effectiveness of urban habitat restoration via a national research collaboration network.